Le Multicolore is a French combination of roulette and billiard 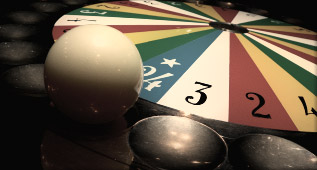 No, it is a misprint, it is not English. It is French. As you have probably guessed it is a Multicolor. It is not a very strange and complicated game. It is so easy to understand that you will not have to start a new notebook called "Le Multicolore" with all the rules and explanations of the rules.

Sometimes the French call it "the roulette of people." It is popular in France, in some areas it is of the same value as a roulette game. It seems that Le Multicolore game is a combination of classic roulette a billiard.

It is a large table with a round disc on one of its ends. The wheel has twenty five cups of the same size. The game is called the Multicolor because there are many colors, among which are six red cups, six yellow, six white and one blue cup.

Every cup has its number. Let us take red color. One cup would have 4, three cups would have 3 and two cups would have 2. It is the same with each color. Only the blue one has 24. All he numbers are the points the players win.

How do you learn the winning number? The dealer strikes the ball into the rail with a help of a cue stick. Then the ball goes through the cloth, goes to a ramp and eventually it enters the wheel and finally lands in one of the cups. That is how we learn about the winning number.

The payoff is paid correspondently to the numbers ascribed on the cups.

Originally it was the idea of French president Raymond Poincare to introduce the game to the large public. He wanted to replace the billiard and the roulette games with something else.

And here we are. There are only 25 cups, instead of 37 or 38. There are five colors, instead of two, and if you bet on the color the zero comes up you lose the bet. It was quite fair.

You can enjoy the game in France or just buy it for home. It would be quite difficult to adjust your roulette table to this game.