We have 7 guests online 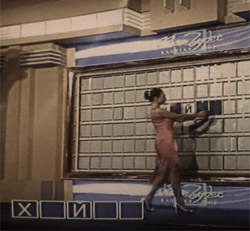 Remember we were talking about the Polish Wheel? So, it is also a variation of the Wheel of Fortune game, which was initially produced in the United States of America but it is a Russian variant.

Pole Chudes means "the field of wonders." When it first was showed on TV, it attracted many people from all over the post-Soviet area. The families would gather at home on Friday evenings just to watch the Pole Chudes.

It is still on. The show is over 10 years but still it attracts many people. One thing was that there was nothing interesting to watch at the beginning of the 1990s and the other thing is that there are lots of well made programs people prefer to Pole Chudes.

Sometimes they say that the game is for narrow-minded people. But for some people it is the only opportunity to show up on TV and to tell the whole world about their small village somewhere in the mountains or something like this.

Another difference between the American and Russian Wheels of Fortune is that in the Russian variant they have a theme for entire game. They also guess the word, but they know the assignment.

There are three rounds of three players each. In each round the player is determined. The winners of the rounds are gathered to play the final round, where the winner of the game is determined. If, according to some circumstances, the player remains alone at the round, he is not becoming a winner automatically but he receives three spins of the wheel to guess the word.

After the winner of the game is determined, he is offered to play a Super Game, when the prizes are put on the wheel and he stirs it to figure out what he will get if e wins the game. After a spin the player is given a word to guess.

Also the player has the points he won during the game. He can choose other things he would like to have, like a bicycle, iron, toaster, stove and so on.

You can also play this game with your friends. Or if you have kids, it would be very interesting for them to feel like adults and guess the words, which can be intricate in spelling. The prize can be the candies, promises to buy something and so on. If they still are not interested, you can try Tyrolean roulette or Le Multicolore.